I am currently taking a readings class on Material Culture, which interprets the past through objects, as opposed to strictly documents. In addition to various readings, we also are expected to prepare three source reports and a paper. The first source report was exploring our midden (trash dump) at least 100 years later to see how someone would interpret our lives by the objects left behind. The second report focused on us exploring an object and the third will deal with a building. For the second report, I chose to explore an 1861 Springfield rifled musket. There were several in a collection of Civil War artifacts at the Myra Museum, home of the county historical society. With that brief introduction, I hope you enjoy this short report.

This piece is part of a nice collection of Civil War era military weapons and equipment at the Myra Museum, home of the Grand Forks County Historical Society.  According to a conversation with Leah Byzewski, this collection was originally owned by the Grand Forks chapter of the Grand Army of the Republic (GAR).  It consisted of nine rifled muskets (Model 1861 Springfield), eight black leather belts with brass buckles containing initials “US” on them, five leather cartridge boxes, with brass “US” plate on the flap, two non-commissioned officers’ swords with one scabbard, two sabers (one possibly cavalry) and two scabbards, four percussion cap boxes, six bayonets and scabbards, and one McClellan saddle.  This collection is part of a larger military collection in the museum containing uniforms and articles of military life from the Civil War to the Korean War.  The Civil War collection is quite impressive for this area given the distance from the major theaters of the war. 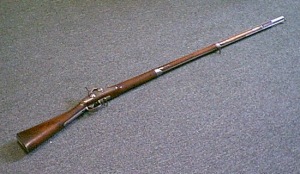 The weapon studied is identical to the other eight rifled muskets in the collection.  It is between four and a half and five feet long, and weighs approximately ten pounds.  It is not a heavy weapon, but is particularly awkward to hold given its length.  The length of the weapon appears to make it a cumbersome piece of equipment for a soldier of the period, especially since the average soldier was only five feet, eight inches tall.

The weapon itself has a rather simple mechanism for operation.  The firing mechanism consisted of a metal hammer and nipple, upon which a percussion cap was placed.  The cap allowed the weapon to fire by igniting the gunpowder in the barrel.  The weapon was a muzzle-loading rifle, meaning that it loaded from the end of the barrel, or muzzle.  Since the bullet was loaded in this fashion, the rifle contained a ramrod, which is located in a slot underneath the barrel of the rifle.  The ramrod is a slender rod with a metal bell-shaped end that slides down the barrel.  Though not removed from the slot under the barrel for equipment preservation, the ramrod is slightly longer than the barrel.

The stock of the rifle was made of wood and stained in a dark brown stain.  The stock was pitted with many nicks and scratches, which likely resulted from service during the war.  In addition, the inscription of the initials “CS” was present near the trigger guard on the left side of the rifle.  These initials may either be the initials of the soldier who used it, a postwar owner, or CS for Confederate States, which would be an intriguing twist if the weapon was captured by Confederate sources for a time during the war.  There were three sites on the weapon, which flipped up and had numerical markings of 1, 3, and 5 on them.

Figure 2: Two of the three sites on this weapon flipped up to assist in viewing.

There were other markings present on the rifle, located on the lock and the breech of the barrel.  The markings on the top of the breech included 1861 (likely the year of manufacture), “H & P”, which is likely representing the division of the Springfield armory, as indicated by other examples from the Springfield armory website.1 Other markings are found on the right side of the weapon underneath the lock and may indicate the distributor of the weapon and city that distributor was located, which are M. T. Wickham and “Phil.”, which likely refers to Philadelphia, Pennsylvania. 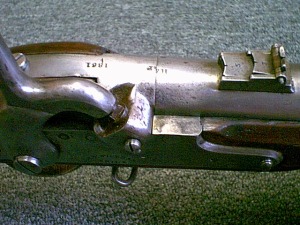 Figure 3: The various markings found on the metallic portions of the weapon.

This weapon was, according to Hardee’s Rifle and Light Infantry Tactics, was loaded and fired through nine motions.  The motions are:  load, handle cartridge, tear cartridge, charge cartridge, draw rammer, ram cartridge, return rammer, and shoulder arms, which includes ready, aim, and firing.2 It seems a complex series of commands, but, with training, the soldier would be able to fire three rounds per minute.

This weapon fired a .58 caliber round, which was called the Minié ball, and was accurate to around five hundred yards, which was a significant improvement over previous technology.3 The Minié ball was a conical-shaped round with three grooves in the base of the round, which allowed the round to grip the rifling in the barrel.  When the weapon was fired, the gases from the burning powder forced the hollow back of the round to expand and further grip the rifling, giving the rifle increased accuracy.  The round is quite heavy for its small size and, with the velocity provided by the rifle combined with its mass, was capable of producing horrendous wounds, which could be fatal in many cases.  Since the bullet and powder were separate, the rifle had an increased likelihood of jamming and appeared to need constant cleaning, however no evidence of this, in terms of cleaning materials, existed in the collection.

Given the tactics used in the war, coupled with the improved technology evident in the rifle studied, the incredibly high casualty rates of the Civil War are logical.  With soldiers firing in massed ranks at close ranges, more men suffered wounds or death, as they relied on tactics designed for weapons with less accuracy than the 1861 Springfield rifled musket.  Studying the rifle in the collection at the Myra Museum allows a greater comprehension of Civil War soldiers and their lives in combat.  Holding such a piece raises questions about what events the rifle participated in, who the soldier (or soldiers) was that carried it and what that soldier (or soldiers) experienced.  Thank you to the Myra Museum for allowing the inspection of part of their collection.

15 thoughts on “Considering the rifled musket”