First off, it’s good to be back to blog with you all, as the last few weeks have been extremely hectic for me preparing for my doctoral comprehensive exams, which I am now through the written portion (cue Hallelujah Chorus). Thanks to intrepid fellow CWH blogger Walter Coffey for keeping up some interesting posts the last two months.

Now, I did find a little time to go see the Spielberg film Lincoln with my two friends and fellow reenactors Stuart Lawrence and Den Bolda. Den dressed in period civilian trappings, while I dressed as a soldier for the event (Hey, if folks can go to comic book movies, etc. dressed as the characters from those films, why not us?), which was fun, as one couple who were visiting relatives in the area, but were from Indiana took their picture with us.

My thoughts on the film are mixed. I felt that Daniel Day-Lewis’s portrayal of Honest Abe was pretty good, aside from being a departure from the classic Hal Holbrook rendition in North and South, or Gregory Peck in The Blue and the Gray (which were good also, but not necessarily as accurate). I also enjoyed Tommy Lee Jones as Thaddeus Stephens.

I would have liked to have seen a bit more on Lincoln’s conduct of the war as Commander-in-Chief, which did not have to mean another Civil War film full of battle scenes, but just more on the course of his presidency. I thought the debate over the 13th Amendment was interesting and one of my colleagues noted that he hoped it would get people into the documents surrounding the debate on that legislation. Den and I both enjoyed the costuming, as the material culture presented in the film was quite good. Overall, I thought the film presented a real conception of Lincoln, more human as opposed to being on such a pedestal.

That said, one other area that I thought was a bit off, and has apparently became a topic of debate between historians is the foul language that appears a few times. Doris Kearns Goodwin, whose book Team of Rivals was an inspiration for the movie did not have much problem with the profanity used in the film. In contrast, James McPherson argued that Lincoln did not approve of such language and likely did not use it to the degree that was portrayed, especially the utterance of “f—” by W. N. Bilbo, one of the lobbyists for the 13th Amendment. Another who argued that Lincoln likely did not swear as much as was portrayed in the movie, but would not have had as much issue with swearing around him was University of Richmond president Edward Ayers.

Overall, I have to agree with both McPherson and Ayers on their assessment of Lincoln and colorful language. I wonder if Spielberg chose to keep such language to resonate with modern audiences, who are used to such things, and if that is so, what does it say about our society. Further, the movie would have been just as good without it, which would have allowed parents to take younger children to see the film. One wonders how many stayed away because of the language issue. It would have been interesting to see, were he still alive, what David Donald would have said about this issue.

While swearing has become increasingly pervasive in our culture, this does not mean it was so in earlier times. I think the work by Richard Bushman called The Refinement of America is particularly relevant. While focused on the eighteenth century, it also explored the nineteenth century, charting the desire of Americans to achieve elements of refined culture, which extended to personal behavior, including manners and decorum.

It is interesting that this has become a mini debate among respected scholars, but it is good, as it allows historians to interject their knowledge and insights on a given topic into the larger culture. Much like the earlier kerfuffle over how Day-Lewis vocalized Lincoln, the issue of swearing by Abe will be another in a series of appraisals on the film in the coming weeks. Such is the nature of the beast when movies based upon historical events and actors are produced. I encourage everyone to at least go and see Lincoln, but also pick up a good biography of him (I recommend Lincoln by the late David Donald).

Hats off to fellow scholar and blogger Bill Caraher for letting me know about this article from Salon.com. By the way, if you are even remotely interested in the ancient world and/or archaeology, check out his blog and follow him on Twitter.

The Salon article deals with the sesquicentennial of the Civil War and encourages buffs of the conflict to read a book a month for the next year and offers a list of the top 12 books on the war. I found the selections rather telling, as many were works of popular history. However, three stood out as strong works that have great influence on the historiography of the war. Among them are David Blight’s Race and Reunion, Drew Gilpin Faust’s This Republic of Suffering, and James McPherson’s Battle Cry of Freedom, all are hard-hitting monographs. The interesting observation, which Bill posed to me in a question, was that Bruce Catton’s A Stillness at Appomattox landed at number one on the list. Some may wonder, why Catton?

I believe that this is an interesting placement, and am surprised that Shelby Foote did not make the list. Catton produced some great works on the war and are deserving of high placement on must read lists. He wrote around the time of the centennial of the war and still resonates within the literature. While I generally agree with the list, I am left wondering how professional historians would alter this list. So, I leave fellow scholars with a challenge that I will also dwell upon and post. What twelve books should folks interested in the war read each month over the next year?

I hope you have all had a Merry Christmas and Happy Holiday season and I wish you all a Happy New Year. Until next time, keep researching and writing.

As promised, I am posting a picture with James McPherson and I from last Thursday. I have also added a couple of pictures of the event to show you how fun it was. Enjoy. 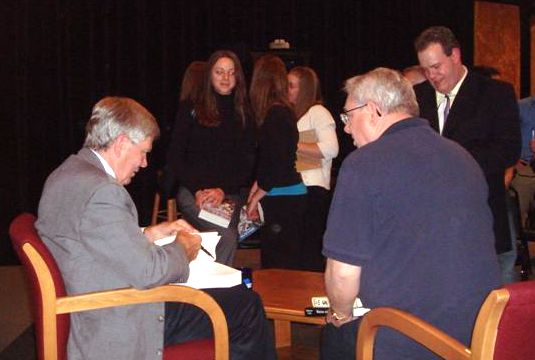 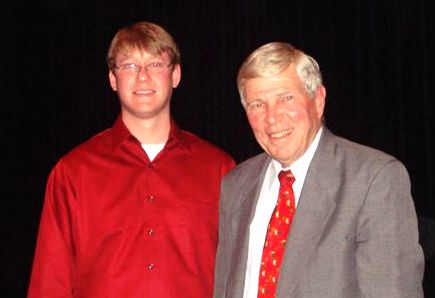 Thanks Dr. McPherson for visiting with us and answering our questions.

As promised, I am posting the video of yesterday afternoon’s seminar with noted historian James McPherson. When I have my photo with him emailed to me, I will post that as well. My question, I’ll admit now, was a bit odd, but related to this site and I wanted to know what he thought about historians using blogs and the Internet. Just so you know, I am sitting in the front row, third from the left and wearing a dark suit coat.